TEDDY, the first paediatric Network of Excellence in Europe, makes the point on research and innovative cares for children.

TEDDY, the first paediatric Network of Excellence in Europe, makes the point on research and innovative cares for children.

2016 is the first year in which a significant increase of new drugs approved by the EMA (European Medicines Agency) for the paediatric population has been observed. There are 36 new molecules now in distribution: drugs for the treatment of HIV also in combination, monoclonal products for haemophilia, the new eltrombopag for immune thrombocytopenia, four new drugs for childhood tumors and 6 orphan drugs for the rare diseases such as the Fabry disease.

This result is certainly to be attributed to the new European Paediatric Regulation, already in force since 10 years, that has tried to address the difficulties to conduct good paediatric clinical research, thus supporting the development of drugs specifically designed for this population.

These successful results, however, should not let us forget that drugs for children are still too few: only one third of the drugs available for adults reaches the paediatric patient and only after many years than in adults. Clinical studies leading to the development of new drugs targeted to the paediatric population are often difficult to carry out, both in terms of time and cost, and are associated with a higher probability of failure than in studies conducted in adults, given to the strong heterogeneity of this population and its relatively small number.

Even today, the use of ‘off-label’ drugs (ie without specific authorization for the disease/age group) exceeds 50-80% in different hospital settings or therapeutic areas. Infants and children with rare diseases are especially affected, so that the productive investment is discouraged.

Only a joint effort of the scientific community, public institutions and companies in the pharmaceutical field, which put together resources, skills and alliances in the creation of research networks and infrastructure dedicated to paediatrics, can definitely improve this situation and make available drugs targeted to this so important part of our population.

Pediatric research, orphan drugs, innovative therapies for children, networks and research infrastructures, have been the themes of the Scientific Meeting and General Assembly of the TEDDY Network, held at the Pediatric Hospital Bambino Gesù of Rome on December 19th, 2016.

The meeting was organized by the TEDDY Network, the first European paediatric Network created with the aim to promote research and innovation f.or paediatric drugs, in collaboration with INCiPiT (the new Italian Network for Paediatric Clinical Studies) and in the framework of the project GRiP (Global Research in Pediatrics), funded by the European Commission under the Seventh Framework Programme.

Here you can download the press release of the event. 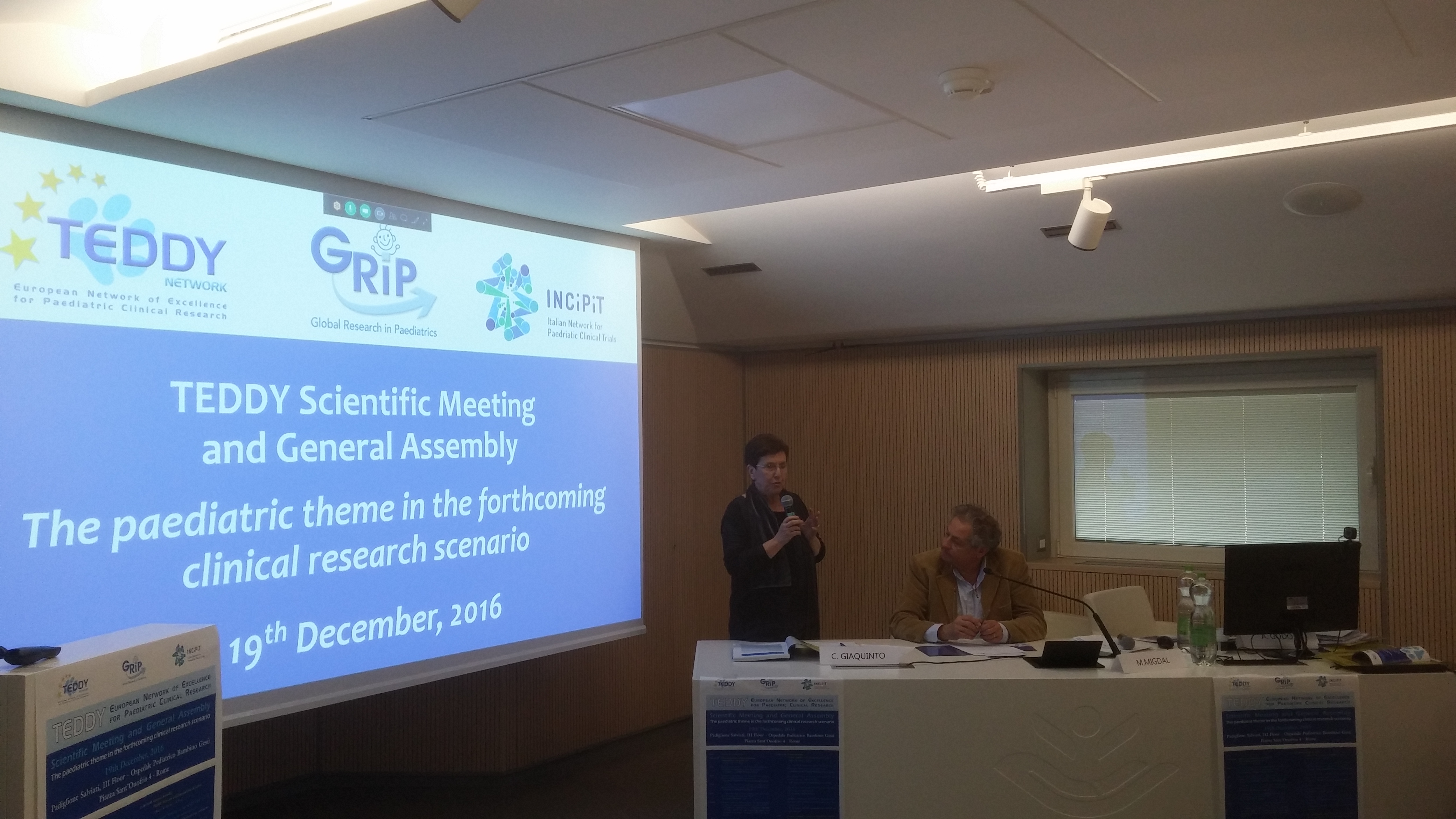 SAVE THE DATE – VIII Foresight Training Course – W...
Save the date – “EPTRI: a new European Research In...
Call for abstract EPTRI Open Meeting
TEDDY is involved in the RESTORE project
The new Guidelines on Consent under Regulation 201...
December 21st, 2016|